How does Phoslock work?

Phoslock works by utilizing the ability of lanthanum to react with phosphate. Removal of phosphate by lanthanum is highly efficient and has a molar ratio of 1:1 which means that one ion of lanthanum will bind with one ion of phosphate. This binding forms the mineral Rhabdophane (an insoluble and biologically inert compound) which strips phosphate from the water. 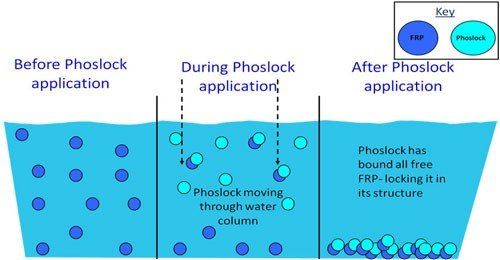 What happens to Phoslock when it has been applied?

Once on the sediment, Phoslock, and the lanthanum phosphate within it, remain as in inert mineral component of the sediment. The nature of the bond between lanthanum and phosphate is such that it will not be broken under any naturally occurring pH range (pH 4-11). Even more importantly, the bond will not be broken under anoxic (low redox potential) conditions, which are prevalent in most lake sediments and many overlying waters. Most other phosphorus binders, especially those containing iron, will release phosphate under anoxic conditions.

How much phosphate does Phoslock remove?

One tonne of Phoslock is capable of removing 34 kg of phosphate (PO 4 ) or 11 kg of phosphorus. With this information and a knowledge of the amount of biologically available phosphorus in the water and surface sediments of a lake, it is possible to accurately calculate the Phoslock dose for a water body